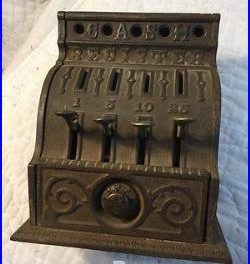 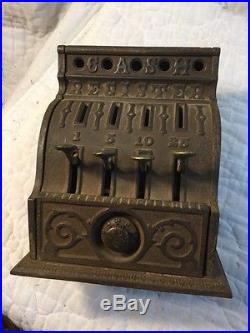 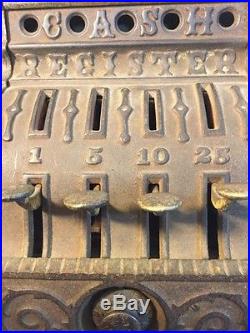 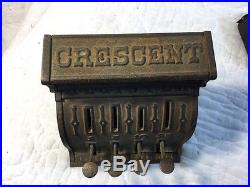 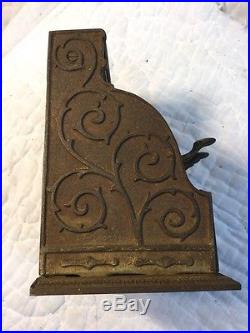 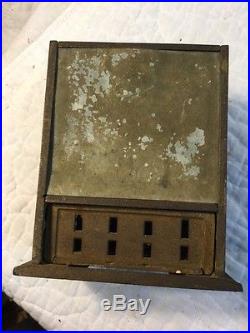 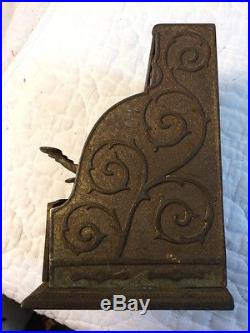 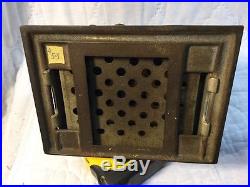 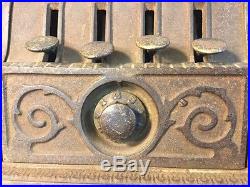 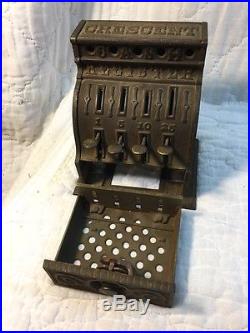 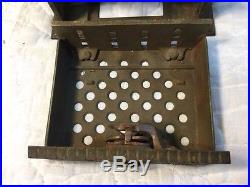 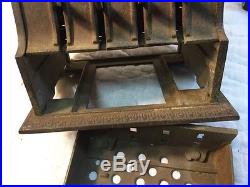 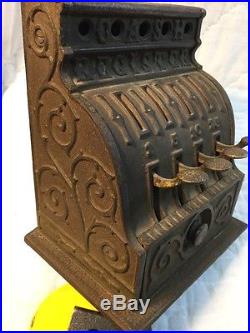 Antique Cast Iron CRESCENT Cash Register 4 Coin Slot Bank J&E Stevens 1890 Era. Front drawer has combination lock that is in open position (we do not have the combination but should be super easy to figure out). Measures 6 5/8″ tall and the base is 4 1/2″ x 6. I believe this is known as the larger version. Has 4 coin slots of differing sizes to fit pennies, nickels, dimes and quarters. No cracks or chips, iron has a wonderful aged patina. Drawers seems to work fine. Please check my many photos. Not marked that I could find but always attributed to J&E Stevens. Guaranteed a genuine antique still bank as described. It came from the estate of a collector and member of the SBCCA. The Still Bank Collectors Club of America or the SBCCA is a non-profit organization founded in 1966. We are listing many more tonight from same estate lot. When John and Elisha Stevens formed the J & E Stevens Company in Cromwell in 1843, they intended to manufacture cast-iron hardware, hammers, and a few iron toys. With their 1859 introduction of the first fire cracker pistol, the brothers began focusing almost exclusively on toy production. Their product line included toy cannons, locomotives, and whistling tops. Though the brothers marketed their products primarily to boys, they also made toy stoves, furniture, and miniature cutlery that they marketed to young girls. A turning point in the companys development came in 1869 with the production of their first cast-iron mechanical bank. This bank, featuring a monkey that popped out of building, inspired numerous competitors to produce similar products and helped create a new genre of product that blended art and function in ways that sparked the imagination and ingenuity of designers. In fact, between 1869 and 1890, the J & E Stevens Company produced more than 300 different models of mechanical banks. Changing times and changing tastes drove the evolution of the J & E Stevens Company. By 1928, the company began devoting itself exclusively to the production of cap pistols. These toys, along with those of local competitors, found their way to store shelves all over the country by the start of the Second World War. World War II production needs, however, created an iron shortage that abruptly brought an end to the J & E Stevens Company, with Buckley Brothers of New York eventually purchasing the company in 1950. Despite bringing an end to their production, the economic ramifications of World War II brought renewed interest in cast-iron toys. Toy collecting, which became popular in the 1920s, exploded in the post-war era thanks to increases in spendable income. Today, original cast-iron banks and toys from the J & E Stevens Company sell for thousands of dollars. The enduring value of these products is a testament to the quality and ingenuity that helped make Connecticut the nations leading toy producer for much of the 19th century. The item “Antique Cast Iron CRESCENT Cash Register 4 Coin Slot Bank J&E Stevens 1890 Era” is in sale since Sunday, May 01, 2016. This item is in the category “Collectibles\Banks, Registers & Vending\Mechanical Banks”. The seller is “spooknook” and is located in Weymouth, Massachusetts. This item can be shipped worldwide.