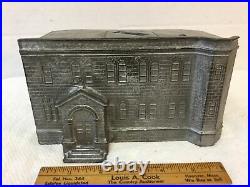 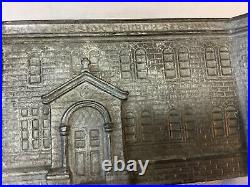 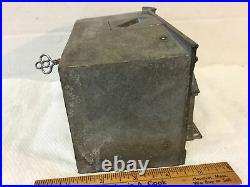 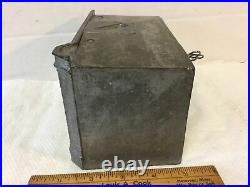 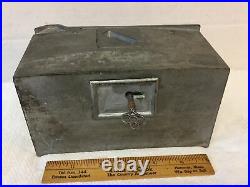 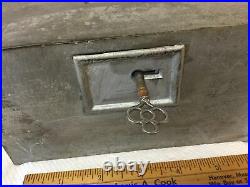 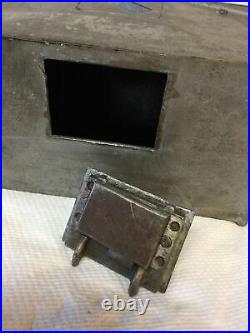 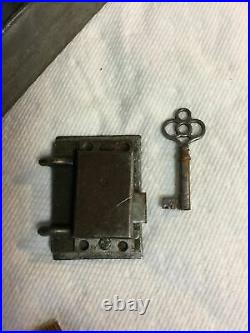 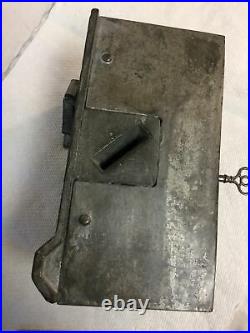 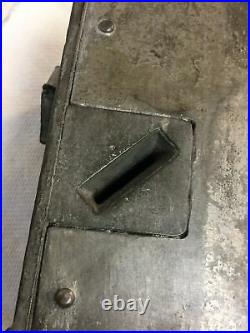 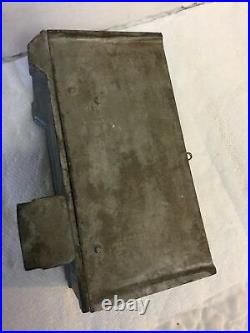 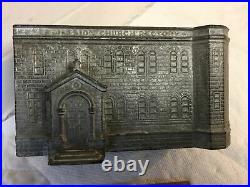 Rare Antique Cast Iron Building Still Bank Mission Church Rectory Boston Roxbury. Measures about 7 1/4″ long and 4 1/8″ high; weighs 5 pounds 1 ounce – hefty fairly large old bank. Front of building is marked “Mission Church Rectory”. The original silver finish has a fine aged patina. No cracks or chips. The door to empty coins is fine with the original key and lock is working. Excellent condition with all original parts including the original key – see my 12 photos. Guaranteed genuine late 19th century era. The Basilica and Shrine of Our Lady of Perpetual Help is a Roman Catholic basilica in the Mission Hill neighborhood of Boston, Massachusetts, sometimes known as “The Mission Church”. The Redemptorists of the Baltimore Province have ministered to the parish since the church was first opened in 1870. In May 1869, Rev. Healy, pastor of St. James’s Church in Boston, invited the Redemptorist Fathers to give a parish mission. Pleased with the success of the mission, Father Healy recommended to the Bishop that the religious order should establish a mission-house in Boston. That year Archbishop John J. Williams invited the Redemptorists to Boston. In September 1869 the Redemptorists acquired a site in Roxbury, then known as the Boston Highlands, on Parker Hill. Parker Hill was named for wealthy Boston merchant, John Parker, who occupied the summit of the hill during the eighteenth century. The five acre estate was known as Brinley Place, and included a grand house, Datchet House built in 1723 by prominent English officer Colonel Francis Brinley in memory of his ancestral home. Colonel Brinley died in 1765. Pierpont enlarged and enriched the house to such a degree that it became known as “Pierpont’s Castle”. The Redemptorists built a modest wooden church on the location in 1870. This was to serve as a “mission house”, a home base for priests traveling to distant parts of Massachusetts, Canada, and elsewhere. The church was dedicated to Our Lady of Perpetual Help. The first mass was said on January 29, 1871. The original structure was located on the site where the rectory now stands. The current church was designed by William Schickel and Isaac Ditmars of New York. The then German congregation broke ground in 1874. The Mission Church was constructed in Romanesque style, of Roxbury puddingstone, quarried from what is now Puddingstone Park, just down the block. An octagonal, cupola-topped lantern rises over a hundred feet above the crossing. The stained glass windows in the nave were made by F. Zettler, and the windows in the shrine were made by Franz Mayer and Co. Side altars were dedicated to the Holy Family and St. The church was dedicated in 1878. At this time the church was not an ordinary parish in which all sacraments were administered, but was instead limited to penance and Holy Communion. Our Lady of Perpetual Help became a parish of the Archdiocese of Boston in 1883. The Hutchings organ was installed in 1897. It was one of the first organs in the country to successfully use electric action, which Hutchings invented and patented. The organ has 62 stops, and close to 3,200 pipes. The spires, added in 1910, were designed by Swiss architect Franz Joseph Untersee, who also designed the rectory. Due to the church’s sloping foundation, the west cross tops its tower at 215 feet (66 m); the other spire is two feet shorter. The western tower houses twelve bells. The length of the church is also 215 feet (66 m), presenting a perfect proportion. The church was elevated to basilica status in 1954 by Pope Pius XII. The church complex was designated as a Boston Landmark by the Boston Landmarks Commission in 2004. The item “Rare Antique Cast Iron Building Still Bank Mission Church Rectory Boston Roxbury” is in sale since Sunday, October 25, 2020. This item is in the category “Collectibles\Banks, Registers & Vending\Still, Piggy Banks\Other Collectible Still Banks”. The seller is “spooknook” and is located in Weymouth, Massachusetts. This item can be shipped to United States.