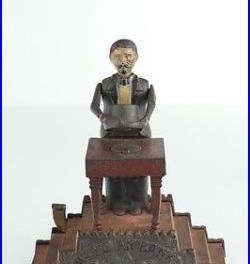 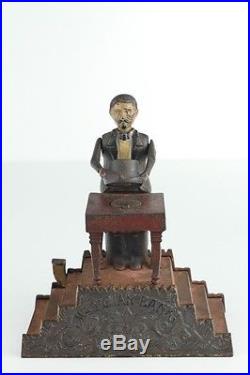 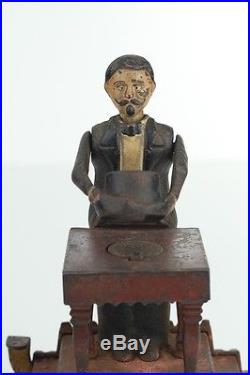 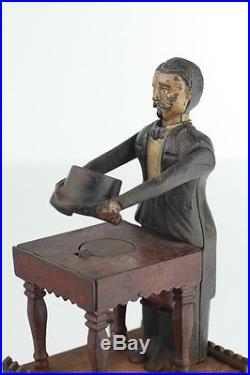 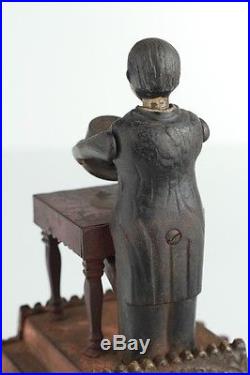 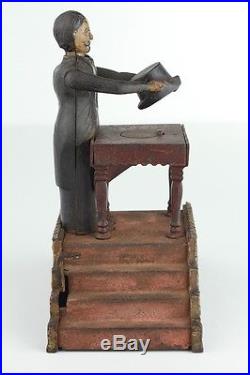 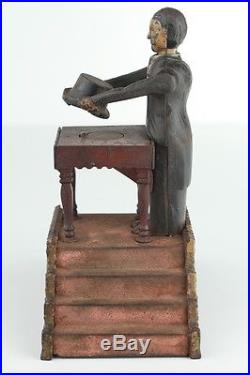 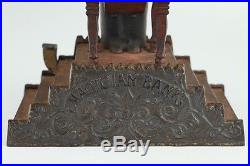 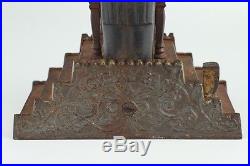 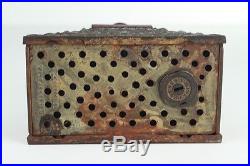 100% Authentic All-Original J&E Stevens Cast Iron Magician Bank. Good overall paint condition, light loss and mild oxidation. Patented 1901, manufactured by Stevens c. Completely Working with coins up to a quarter in size. 7″ long, 8″ high, 4 wide. Our High Resolution Photographs are provided for your detailed inspection of the item. Thank you for viewing! The bank was patented January 22, 1901, by William C. Bull of Philadelphia, Pa. Assignor to Abraham L. Kesner, also of Philadelphia. In this case the bank as actually produced is considerably different than the original patent drawings. For example, the overall appearance and configuration of the actual bank, plus much of the mechanism, is quite unlike the drawings. The figure of the magician, the table, and general principle of operation are, however, somewhat similar. This is not an unusual circumstance as many of the mechanical banks are at variance with their respective patent papers. There were numbers of reasons for these changes, including a better operating bank, a more attractive item, more efficient operating mechanism, problems of casting parts, ease of assembly, and so on. In the specific case of the Magician Bank there is no question but that the changes made from the patent drawings resulted in a more attractive bank with better operation. It was manufactured by the J. Stevens Company of Cromwell, Conn. And pictured in their catalog for 1906, but does not appear in the 1911 issue or any of their catalogs after that year. The bank operates as follows: A coin is placed on the provided section in the center of the table (note picture). The lever is then depressed. The magician lowers his hat covering the coin on the table and at the same time his head tilts forward as though observing his own actions. Upon releasing the lever the parts automatically return to the position as shown in the picture and the coin has disappeared. The magician, of course, is now ready for another coin so he can make it disappear too. Actually the coin rests on a trap door, the hat when lowered trips the trap and the coin slides into and down a chute through the legs of the magician and on into the base platform. Its a clever action bank, well designed, and will work with any coins up to and including those the size of a quarter. Powered by SixBit’s eCommerce Solution. The item “Antique Original c. 1906 J&E Stevens Magician Mechanical Cast Iron Bank Working” is in sale since Thursday, May 18, 2017. This item is in the category “Collectibles\Banks, Registers & Vending\Mechanical Banks”. The seller is “opamerica” and is located in Clearwater, Florida. This item can be shipped to United States.